Documentation of the Seminar About the Role of the Performer, 6 March Black Box Theatre, Oslo International Theatre Festival 2016

«Der Schauspieler ist tot» she stated confidently while flicking her hair to the side. «Oh, eh, ach so, eh, wie meinst du?» I uttered in my clumsy German. “The classically trained actor who through his/her craft conveys emotions to an audience, does not have a future”, she answered convincingly. The German director/performer/curator/academic, who I met in Brussels back in 2009 during Kunstenfestivaldesarts, looked at me as if this was not something I already knew. Well, at the time it had become increasingly apparent, that an overwhelming majority of the contemporary work, which were performed at festivals and independent stages throughout Europe, had every type of performer except performers like myself, namely classically trained actors. Children, animals, technicians, people from the street, disabled, elderly, youths, refugees, Nazis, homeless people, singers who do not sing, dancers who do not dance, and the list goes on, had overtaken the trendy and vibrant stages of Europe. When I then later started reading about the post-spectacular theatre, which does not have the performer as an elementary component in its definition of theatre, it would be about time to start to worry about my profession. Was all my hard work the last 10 years a waste? All my daily tongue-twisting exercises, my continuous rolling up and down the spine, my cat stretches, my deep dive into the complex world of Shakespearean language, my well articulated projected voice which carried to the back row, was all this old fashion rubbish, that no one, who concerned themselves with contemporary theatre and had good taste, would even care about? Had my dear craft become an obstacle in order to continue to work with progressive and interesting directors and theatre makers? Did I notice a sensation of being slightly offended? Was the trained actor about to become superfluous?

All these questions might not be as interesting in 2016 anymore. However, there is little doubt that the role of the performer, within theatre and dance, has evolved and changed, and continues to develop in different directions. An actor does not necessarily only embody a character in a narrative, nor does a dancer merely dance a given choreography. The performer might have a function as a co-writer, co-dramaturge, perform as him/herself, perform simple single actions, or only figure as an arranger of the performance. The relation and border between performer-audience is evolving, and at times entirely repealed. The traditional roles of dancer/choreographer, actor/director are also subject to alterations. Some artists work with a flat structure in a collective process, others alternate being the outside eye, whilst others again keep the traditional structure and given assignments.

Together with one of Norway’s most exciting and successful contemporary choreographers, Ingri Fiksdal, we wanted to make a seminar where we could investigate the role of the performer further, how these changes and displacements influence and affect the arts.

We collaborated with Black Box Theatre in Oslo and the seminar took place during Black Box‘s own festival OIT (Oslo International Theatre Festival). The seminar was tied up to the performances during the festival, so that it was not purely a theoretical seminar, but with practical elements to it, as well.

Also, the fact that the University of Oslo have closed down their faculty of theatre studies has resulted in a vacuum within the theoretical performance discourse in Norway‘s capital. This is very unfortunate in a time when theory has become an increasingly important tool for contemporary practitioners.

We invited the following five speakers; Trine Falch, Prof. Dr. André Eiermann, Anders Paulin, Prof. Chrysa Parkinson and Lisa Charlotte Baudouin Lie, all highly respected within their field, to discuss, debate and lecture about the development of the performer. In the intersection between the craft and the conceptual, new areas are explored and discovered. Is the craft and specialisation left behind, and overtaken by other types of expressions and aesthetics? How does the one influence the other, and where does today’s focus lie? We wanted to explore the role of the performer in contemporary performance, theatre, dance and choreography; where we are, where we have been and where we are heading. And ask the question; what can a performer be?

In the following you will see a recording of four of the five lectures from The Seminar About the Performer, followed by panel discussions.

– Prof. Dr. André Eiermann (D) – theatre scholar and dramaturge. Developed the term “postspectacular theatre” in 2009. Studied and obtained his PhD at the Institute for Applied Theatre Studies at the University of Giessen, Germany. Replaced Prof. Hans-Thies Lehmann in 2010 until 2011 as interim professor at the Institute for Theatre, Film and Media Studies at the Goethe University in Frankfurt am Main. Working as a dramaturge for Heine Avdal and Yukiko Shinozaki, and currently as guest professor at the Universität der Künste in Berlin.

– Anders Paulin (SE) has been directing 30+ productions at theatres as Nationaltheatret in Oslo, Deutsches Schauspielhaus in Hamburg, The Royal Theatre in Copenhagen and Backateatern in Gothenburg. Since a number of years a recurring thematic figure has been non-mimetic performative tools, with a focus on story and performer as interfaces and an idea of the stage as platform for exchange and production of experiences rather than representations. Currently Anders Paulin is working with the accumulative archive /performance Three White Soldiers together with Johan Forsman and the research project Non-Mimetic Peformativity at the The Danish School of Performing Arts in Copenhagen. http://www.anderspaulin.com

– Prof. Chrysa Parkinson (U.S.)- American dancer and teacher, based between Brussels and Stockholm. Parkinson is the head of New Performative Practices at Dans och Cirkushögskolan in Stockholm. She also teaches regularly at P.A.R.T.S. in Brussels, and has worked with artists such as Rosas/Anna Teresa de Keersmaker, Mette Ingvartsen and Jonathan Burrows.

– Lisa Charlotte Baudouin Lie (NO) – director, actor, playwright and writer. Lie trained as an actor at Norwegian Theatre Acadamy in Fredrikstad and as a director at Stockholm Acadamy of Dramatic Arts. She has influenced Norwegian performing arts/live arts through a mix of pop-culture, trash and misanthropical honesty. Lie‘s performance Skogsunderholdning will be shown during OIT on the 5-6 March.

Camilla Eeg-Tverbakk (NO) is a dramaturg and associate professor at the Norwegian Theatre Academy (NTA)/ Østfold University College. She holds an MA in Performance Studies from NYU and an MA in Theatre science from the University of Oslo. She is currently finishing her PhD at Roehampton University/ London on documentary theatre and dramaturgy. She freelances as a dramaturg for theatre and dance companies, has extensive teaching – and lecturing experience. She is the editor of “Dans i Samtiden” (Spartacus 2006) on Norwegian contemporary dance, and has co-edited “Performance Art by Baktruppen, First Part” (Kolon 2009) and “Responsive Listening” (Brooklyn Arts Press 2015) on the teaching philosophy of NTA.

Ingri Fiksdal (NO) – Choreographer. Artistic researcher at Oslo National Academy of the Arts. Fiksdal has developed internationally acclaimed performances such as Hoods, Band and Night Tripper.

Valborg Frøysnes (NO)- actress and theatre scholar. Trained at Rose Bruford College, London. Has a master in performing arts from the University of Frankfurt am Main. 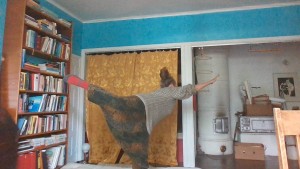 Mermen or mermaids and seal-people, as well as seal-people and Finn-people, are confused in the minds of some informants. Seals of the larger kinds, called “haf-fish,” were credited with the power of doing people harm or bewitching them. In some cases they were Finn-men in seal-form. […] Some claim that each Finn possessed a seal-skin garment, covering, or envelope wherewith he clothed or enclosed himself when he went into the sea.
– Ur “Water-Beings in Shetlandic Folk-Lore, as Remembered by Shetlanders in British Columbia” av antropologen James Alexander Teit 1918.

Roee: To maybe find a closing to this discussion. Would you like to describe a solution that you think could solve this problem?

Lena: We have to get the seals more afraid of human beings again.

Roee: Do you have an idea of how to do it?